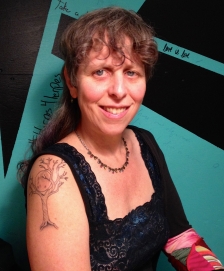 I am a social rights activist and a writer of speculative, liminal and interstitial fiction. Originally from Brooklyn, I now make Montréal my home.

My short fiction has appeared or is upcoming in The Future Fire, Spark: A Creative Anthology, TFFX 10th Anniversary Anthology, Glittership: an LGBTQ Science Fiction and Fantasy Podcast, Glitership: Year One anthology, After the Orange: Ruin and Recovery, and Amazing Stories.

My debut novel, Cycling to Asylum was longlisted for the Sunburst for Excellence in Canadian Literature of the Fantastic and optioned for a feature-length film. My second novel, Run J Run, was published by Renaissance Press in 2019. Zee, my third novel, was released in both French and English by Mouton noir Acadie in 2020.

When I am not writing, battling slumlords, bringing evil bureaucracies to their knees, and smashing borders, I curate and participate in readings and literary events in Canada and abroad, and have served as moderator or panelist at the Metropolis Bleu/Blue Met Literary Festival, the Conference on Canadian Content in Speculative Arts and Literature, the Belles Lettres readings for NDG Arts Week, and the World Science Fiction Convention, among other events.

I am also a freelance editor and writing workshop facilitator.

On this site, you will find some of my writing and reviews, and occasionally, my preoccupations. Feel free to share your thoughts on any of the above.