I recently moderated a virtual roundtable discussion on polyamory in speculative fiction, and one of the writers who participated was B R Sanders. After the discussion, I decided to read their novel. 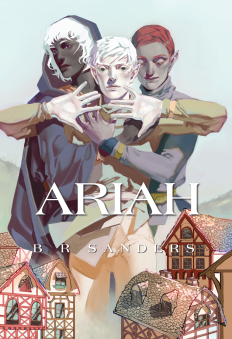 It’s said that you can’t judge a book by its cover, but I was immediately intrigued by the image of the triad which appears on the front of the book. Strong, proud, protective, a little defiant—the three characters were depicted in a way that made me want to learn more not only about them but about their world.

When I was younger, I read a good deal of fantasy, but these days, I generally prefer character-driven, realistic science fiction. This is because, for whatever reason, as an older adult I have often found it difficult to suspend my disbelief when reading certain types of fantasy. In fact, at the very beginning of Ariah, I admit to having inwardly rolled my eyes at the first mention of elves. However, it couldn’t have been more than a few paragraphs later that I was speeding smoothly along, reading about these fascinating people (elves) who felt authentic and were compelling.

The characters in Ariah are nuanced and complex. They were similar enough to people I have known or could imagine knowing to make me feel grounded, and different enough that I was intrigued and eager to learn more. The protagonists had flaws but it was easy for me to care about them. I found myself cringing when they screwed up but I never stopped hoping that things would work out in the end.

Ariah is a story that is filled with many different types of relationships. Along with the characters, we experience the richness and particularities of these relationships, which ranged from the bond between a student and their teacher, the love and loyalty of friends,  romantic love whether sexual or asexual, and the intense (and sometimes dysfunctional) connections between members of blood or found family. I very much enjoyed exploring this with Ariah and the people around him. I also liked that the story took place within a certain political context, with all the ugliness, pain, and injustice that we find in our worlds, and with all the hope and courage too. Finally, Ariah is also a classic adventure story of a young adult growing up and learning to understand himself and his world while meeting interesting people and going on grand adventures filled with both fun and hardship.

The world building was well done. Sanders is very good at avoiding exposition, instead just letting you work things out for yourself. I actually did not figure out every detail of Ariah’s world or worlds and still had some questions at the end. Although I think this was a small flaw (since I am generally pretty good at putting things together), I much prefer this situation to being the victim of an information dump that pulls me out of the action. In fact, not being certain of every detail concerning how this world functioned made me interested in learning more, perhaps by reading other books that might take place in this same world. I think I’ll start looking for some right now.